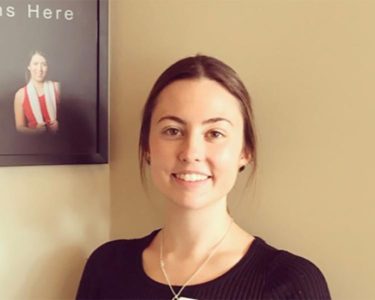 Amy completed her five-year degree of Chiropractic at Macquarie University in Sydney. Since graduating in 2014, Amy has looked after the Oatley community. Amy has lived in the Oatley area her entire life and is passionate about helping people of all ages achieve their health goals through chiropractic care, exercise, rehabilitation and nutrition.

Amy first started seeing a chiropractor at the age of five, and this is where her passion for chiropractic began. When Amy was younger she participated in many sporting activities including swimming, athletics, oz tag, dancing and netball. Amy competed at state and national levels in swimming, her continued chiropractic care helped Amy to perform at her best and avoid any injuries along the way.

Amy worked at a local aquatic centre for 10 years whilst studying and taught children of all ages to swim, this is where her passion for helping children evolved. Amy looks after a lot of families and in doing that she treats children and babies of all ages. Amy has furthered her paediatric education by undertaken post-graduate paediatric seminars including neuro-impulse technique (NIP), Well Adjusted Babies, Webster Technique as well as attending the Kids Summit in 2017.

Amy incorporates a number of other modalities into her treatment sessions including soft tissue work, trigger point release, dry needling, rock taping, ENAR therapy (Electro Neuro Adaptive Regulator) and rehabilitation. She uses manual chiropractic techniques as well as a variety of gentler approaches such as the Activator and Thompson drop piece.

Amy got married in 2017 and looks forward to travelling and exploring more of the world! Amy is committed to her ongoing education and attends regular seminars, she also makes sure she is up to date with the latest evidence based care. Amy has also been a member of the Chiropractic Association of Australia for a number of years as well as a member of the Chiropractic Australia Association.

Amy can be found at the following clinics:

Some of Amy's favourite things: